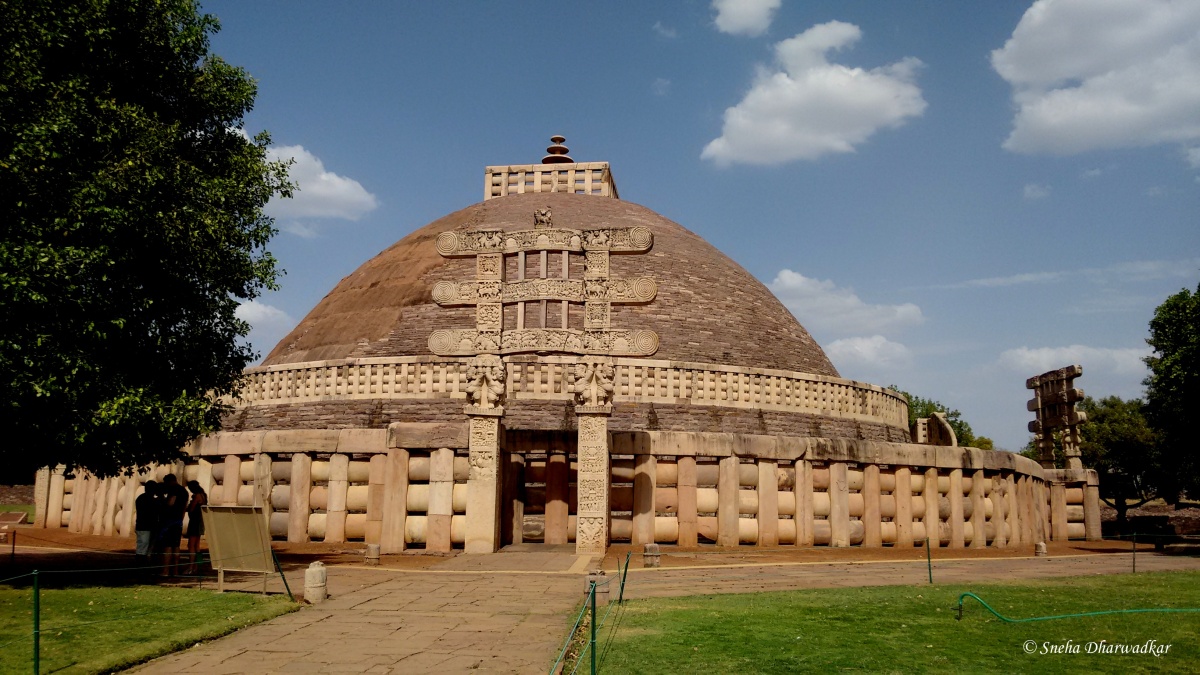 I happened to visit Sanchi unexpectedly. While travelling to Bhopal which is a capital of Madhya Pradesh, a state in Central India,on 5th of June, I had a spare day in hand and since I had nothing better to do, I decided to pay Sanchi a visit. Sanchi is roughly 43 km from the city of Bhopal and is well-connected by frequent buses and trains. An hour’s journey and you reach Sanchi.

Sanchi has the oldest and most well preserves stupas in India. Not only stupas but there are temples, pillars and other monuments which record the origin, rise and the fall of Buddhist art and architecture in India from the period of third century BC to twelfth century AD, spanning the period of thirteen hundred years.

Sanchi is supposedly the birth place of Buddhism in India. The first stupa at Sanchi was built by the Maurya emperor Ashoka during his reign in 3rd Century BC. It was a simple structure at first, later in First century BC four ornamental torans (gateways) were added to it.

Over the period of time, many more structures were added. Today at Sanchi, we can see 27 monuments which include stupas, temples, pillars, begging bowl, monasteries, shrines, etc.

Sanchi is nested on a hill top of Raisen district of Madhya Pradesh. Being protected by the Archaeological Survey of India, wildlife flourishes here. I saw a variety of insects, birds, amphibians, reptiles and mammals during my visit to Sanchi. In birds, most notable sighting was of Crested bunting male and female feeding on the lawn in front of the Stupa 1, Brown rock chats on the stone structures, woodpeckers pecking on the grounds, sunbirds, tailor birds, Brahminy myna, Black drongo and Indian and Oriental Magpie robins. Common garden lizards were strutting in the lawns, on trees and on sheltered rocks. Butterflies like lemon pansy, blue pansy, yellows, blues, tailed jays were fluttering around and were a delight to watch. But my most cherished sighting was so unexpected that I almost squealed in delight enough to startle the animal.

While walking from the stupa 1 to Stupa 2, one has to climb down to a lower altitude. The stairs are made of stones surrounded by huge rocks and shrubbery. At the stupa 2, there is an artificial pond from where the pipelines carry the water to stupa 1. One of the pipelines was leaking a little and water was dripping out where many birds had come to drink water which had accumulated on the ground. I, being severely dehydrated from the hot summer of central India and temperatures flaring to 43 degrees and giving the feel of 47 degrees, went to this water and gave myself a good splash on face. Here is when I saw a movement and saw something like a mongoose hiding and watching me, equally surprised at my presence. I almost passed it thinking it was a common mongoose, but had to almost jump in excitement after putting back my spectacles on seeing that it was a ruddy mongoose! I had read a lot about ruddy mongoose and seen it in pictures and always wanted to see one myself, but this encounter took me by a complete surprise. I saw the mongoose a lot of times during my climb down to the stupa 2, but unfortunately, I wasn’t carrying my camera with me and mobile camera’s zoom wasn’t enough for the mongoose. But the sight of that beautiful mongoose with its tail tip pointing to sky as if an antenna will remain etched in my memory forever.

After climbing down to stupa 2, I dipped my feet in the pond, sat there observing many damselflies, dragonflies and skittering frogs that inhabited the pond and the lush green vegetation around it provided the much need cool air. That was the last monument to be seen at the place and after having a nice hot and strong coffee, I said good bye to Sanchi.

Buddhism speaks a lot about non-violence, conserving environment and wildlife and about not harming the animals. The unplanned visit brought much-needed peace to my mind and the sightings of wildlife made one of the best ‘World Environment Day’s I had!

Hello and welcome to my blog. I am Sneha Dharwadkar, a Wildlife Biologist by profession currently working on herpetofauna (reptiles and amphibians) in Tillari region of the Northern Western Ghats, India. I am practically in love with herpetofauna (reptiles and amphibians- some of the creepy crawlies!) and more so with turtles. I find solace in nature and run to the woods whenever and as much as I can and also love to travel (because of which I am broke most of times). I love talking (I do better talking than writing). Apart from wildlife and travel; I raise my voice for gender equality. This blog has materialized after I finally did overcome my fright for writing and after pushing myself (and many of my friends pushing me) to tell the stories of my adventures. On this blog, I will be writing about my wildlife adventures, field experiences, travelogues and interesting encounters with wildlife or people. Feel free to write back to me or tweet to me @herpomania. View all posts by Sneha Dharwadkar